To help the environment and live in a less polluted world, an ancient recipe used by the Romans and also by the Japanese has been used, namely the making of bricks made and created entirely of hemp. 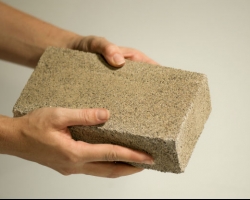 Through this return to the past, therefore, the building industry is once again sustainable thanks to a new brick whose production does not include CO2 emissions. In the compound prepared for the construction of the biomaterial, an ideal environment is created for the formation of crystals: within five days bacteria die, the brick is formed and compact, solid, durable and is ideal and safe for the construction of a house. Hemp, in fact, is a plant that produces more biomass in the world. It grows in just four months and is able to absorb carbon dioxide during its life cycle. For this reason, a construction made with ecological materials, such as biomaterials, does not harm those who live in the building, on the contrary, it even lowers the levels of external pollution, thus resulting in significant energy savings.
The introduction of biomaterials in the building industry officially marks a great green turning point in the field of cementing, which steals soil and clean air. 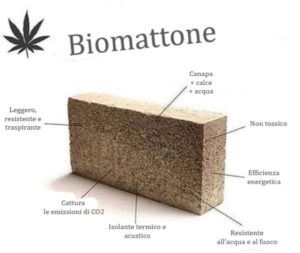 The biomattone is proposed in the real estate market as an alternative construction that uses the inner and more woody part of the plant useful for the realization of a non-toxic, carbon-free and energy-efficient material.
In fact, the hemp fibre, the fabric that is inside its stem, alone or mixed with other natural fibres, can be used to produce insulating and sound-absorbing panels. What remains of the hemp stem, instead, after the extraction of the textile fibre, can be used in the preparation of plasters or, if mixed with lime, to make insulating or sound-absorbing coats.

The double-sided photovoltaic panel can potentially decrease the cost of electricity generated, because this type of solar cell can convert...

PICO: A garden in your palm. Growing is fun again!

Pico is an high-tech "home garden" that allows you to grow various types of plants in a very small space:...

Pura-Case: the ozone garment carrier that eliminates viruses from fabrics

The design studio Carlo Ratti presented Pura-Case, an intelligent garment carrier that sanitizes clothes thanks to an ozone treatment.

The latest generation of in-ear earphones is made of silicone

The Arioso company has replaced the classic membrane with silicone micromembranes with results of higher quality and intensity than the...