In 2024, the first female footprint on the moon

NASA is ready for Artemis, the important lunar mission that will change the history of space

In 2024 we will return to the moon. To announce it NASA communicating the next lunar mission that will bring a woman for the first time in history. 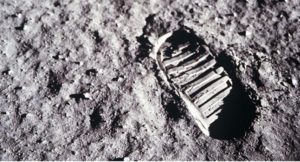 A symbolic step, then, that aims, not only to test new technologies, but also to set up a crew in which there is female presence. This return to the moon after 45 years since the last time, in fact, will have as a mission to leave, on the dusty ground of the most romantic satellite existing, the footsteps of a female astronaut.

The new mission has been baptized Artemis, whose goal is to land its astronauts in the lunar South Pole, where no man (or woman) has yet gone.

“The first time the man set foot on the Moon, he did so thanks to a program called Apollo, a program that revolutionized the history of mankind forever. But Apollo had a twin sister named Artemis, the goddess of the Moon. So I think it’s extraordinary that, after 50 years of waiting, the Artemis program will be able to bring, in addition to the next man, especially the first woman on our natural satellite. Explained Jim Bridenstine, NASA Administrator.

To achieve Artemis‘ goal, NASA is building a space vehicle to take astronauts into deep space that will usher in a new era of space exploration. The name of the spaceship will be Orion and, in addition to having a capacity of four people, it has been specially designed to support astronauts hundreds of thousands of miles from home. Orion will also have systems capable of operating reliably away from its operational headquarters, keeping astronauts alive in case of an emergency and still being light enough to be launched by the Space Launch System, the powerful rocket set up at the modernized space port at the Kennedy Space Center in Florida.

Biosynthesis and characterizations of nanoparticles have become an important branch of nanotechnology. A novel biosynthesis route for Silver Nanoparticles (Ag-NPs)...

The new polymer degrades when exposed to the UV rays of the sun and can solve the problem of marine...

Artificial Intelligence to calculate risk from Covid-19: AI-SCoRE is born

It will work thanks to an AI algorithm that will integrate diagnostic images, clinical and laboratory parameters, inflammatory status, and...

Coronavirus: the risks in the subway with and without mask