Conceived by the PRIMA project, the retinal prosthesis was implanted for the first time at the Fondation Ophtalmologique in Paris. 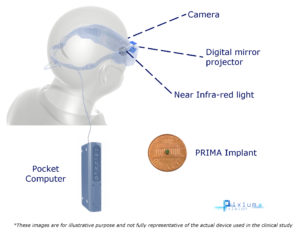 PRIMA is the incredible project born to restore artificial vision in blind patients thanks to a retinal prosthesis composed of a microchip capable of receiving images from a camera fixed on special glasses. Specifically, the microchip translates the images into nerve impulses that, through the optic nerve, reach the brain allowing the much aspired vision.

“The retinal prosthesis was initially designed and manufactured by Daniel Palanker, of Stanford University. The bionic eye works thanks to a microchip consisting of 378 miniaturized ‘photodiodes’, with total dimensions of only 2 millimeters in length and width. Implanted under the retina, it is able to replace the missing retinal ‘photoreceptors’ in patients with age-related macular degeneration (AMD) of atrophic type at the terminal stage of disease, partially restoring lost visual function and, with it, a greater degree of independence and autonomy“. Explains Dr. Andrea Cusumano, researcher in ophthalmology at the University of Tor Vergata and scientific medical consultant of the PRIMA project.

Thanks to the conception of this bionic eye, five blind people, due to a now terminal form of maculopathy have regained, even if only partially still the sight, regaining a minimum of autonomy (they can see very large characters and even sequences of letters).
Maculopathy is the degeneration of the central part of the retina, essential to read, drive, recognize faces and more. The atrophic form (more than 80% of cases) is currently incurable even if new hopes come from clinical studies with a special laser.

The five implants of the bionic eye were carried out at the Fondation Ophtalmologique “Adolphe de Rothschild” in Paris. The implantation of the prostheses was successful and did not alter the patients’ residual vision at all; on the contrary, during the subsequent rehabilitation, there was a gradual increase in visual perception, up to the recognition of forms, letters and numbers.

How do the insects see? U.S. researchers create a backpack-microcamera

Researchers in Washington have designed a micro-camera that can be installed like a backpack on the backs of insects and...

The new model will allow to instruct new machine learning algorithms in less than 30 seconds with unprecedented efficiency and...

On the Svalbard Islands, near the North Pole, an indestructible archive has been created to store all the main open...

In Milan the robot barman who prepares cocktails in 30 seconds

A club in Piazza Duomo in Milan has "hired" the first robot barman in Italy: his name is Toni and...