Purposely talking, technology has its vital role and limitless possibility of finding smart and practical solutions. The feature of technology span in wide range of usefulness that serves all parts of the community and certainly help making easy and leverage  living condition.

As the year 2002 the WHO estimated that the number of people with visual impairment had reached almost over 160 million, this roughly estimation make us to consider that there is a need to look at this community and try to understand the sort of problems they are facing, and what kind of possible tool which could effectively help them engaging in life and practice their activates without a considering help from the community. The WHO also estimated that the high majority of the visually impaired people are from poor countries which raise the problem to other level of complication, in this particular case we need to understand that we should look at technology that could help, but from the point of view that, it should be in the hand and affordable for everyone in need. Melting  all these factors and try to get one alloy which combining all the  features is very difficult task, where  we should look at breaking the barriers by using  high technology and curry the consideration of the financial cost. Balancing these two entities is very challenging and need a deep thinking.

Concerning this project, a powerful story could be told about emerging the ideas from the bottom of suffering, this project has come from a place where the need for help is the resonating sound wherever you go there.  In fact, the project started from Aboshokrefugee’s camp in Darfur, it started when the time of the crises and Mr.Abdalbasit was working as   social worker 2013, which is a sort of job that kept him   close to the daily problems that face the people with disabilities in such war zones. At that time a human call had its sound to let him think deeply and try to help by the available resources. As the story goes to take a humanitarian face, the idea of smart care cane has been emerged, purposely to help the visually impaired community everywhere.

Smart care tech is highly thoughtful solution for the visually impaired people, as in this case there is a need for a cane that fully function, to guide the visually impaired person and minimize the risk that they could face. There are different   technological solutions that been introduced to the community of the visually impaired,  as example the smart cane  has  been invented   to replace the traditional Wight  stick, where laser and sensors   are  used, these had work almost to solve the mobility problem, it helped  effectively to far  extend, but still some holes has to be covered. In the visual disability case, there are four major problems that commonly standup. The barriers or obstacle, water, calling for help, and guiding for the location of the visually impaired in case that he/she get lost. The fusion of all these factors in one part is not an easy task, but in general and by the survey, our smart cane effectively increased the level of protection for the users by 75%, and more particle than the old technology by 97%. Looking at the financial cost the cane is way cheaper by 30%, which make it more affordable to every user. 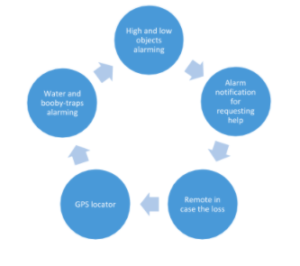 The chart represents the five functions of smart care cane

By all means the cane is powerfully effective and represent an integrated solution for the visually impaired individuals, more over it carries all the needed guides with affordable cost.

As a vision for the future we believe that the promotion of such invention will contribute widely to help the visually impaired community and guarantee for them easy and flexible life.