A team of researchers at the University of California at Los Angeles has developed a pair of gloves capable of translating sign language into words. 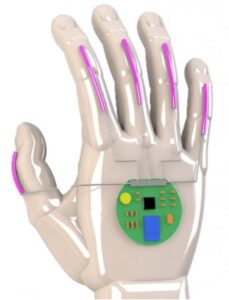 It may sound like science fiction, but it’s reality. A team of researchers at the University of California at Los Angeles has developed a pair of gloves that can translate sign language into words. The sign to speech translation system consists of yarn-based stretch sensor arrays and a wireless printed circuit board. In practice, the researchers inserted thin sensors along the fingers of the gloves. These chips are able to detect movements and transmit them (in the form of electrical signals) to a small control unit at the base of the glove. The next step is the wireless transmission of the impulses to a smartphone which, thanks to sophisticated machine learning systems, can convert the electrical signals into words and phrases. The system offers high sensitivity and a very fast response time, allowing the translation of signs into spoken words in real time. Initial tests with four volunteers have shown that high-tech gloves can recognize 660 American sign language movements, including numbers and letters, in less than 1 second, with over 98% accuracy.

Translating sign language into words with a pair of gloves

The coordinator of the project is Professor Jun Chen of the University of California at Los Angeles. “We have demonstrated – he wrote in the pages of the authoritative scientific journal Nature Electronics – that a wearable sign to speech translation system, assisted by a machine learning system, is capable of accurately translating American sign language hand gestures into sign language. Our hope is that this system will open the door to an easy way for people to use sign language to communicate directly with non-users without the need to translate them. We also hope that this system will help more people to learn sign language themselves.

Researchers at Pudrue University developed an antimicrobial peptide-based treatment for metal surfaces that targets the bacterial population The focus on...

At 1.50 p.m. (Italian time) the Perseverance probe took off from NASA's Cape Canaveral base in Florida to search for...

The cochlear implant is based on LED lights and stimulates neurons in rodents' brains with extreme precision, generating a partial...