Phosphine in the atmosphere of Venus: is the proof of life on the Planet?

The researchers of the Royal Astronomical Society have identified traces of phosphine in the atmosphere of Venus, a gas that could indicate the presence of life forms.

Is there life on Venus? The question rebounds with some insistence in the aftermath of the conference held by researchers of the Royal Astronomical Society to announce the discovery of traces of phosphine in the atmosphere of the second planet of the Solar System. Phosphine (phosphane according to IUPAC nomenclature, hydrogen phosphide or phosphorus trihydride) is a so-called “biosignature”, i.e. a substance that provides scientific evidence of past or present life. On Earth, this gas is “produced” by the metabolic activity of microorganisms living on the sea floor. Hence the hypothesis that, even on Venus, there are living beings capable of producing this gaseous and highly poisonous substance. The discovery was made by a team of scholars led by Prof. Jane S. Greaves of the School of Physics and Astronomy at the University of Cardiff. To detect phosphine in the Venusian atmosphere spectrum, the researchers used the James Clerk Maxwell Telescope and the Atacama Large Millimeter/submillimeter Array. 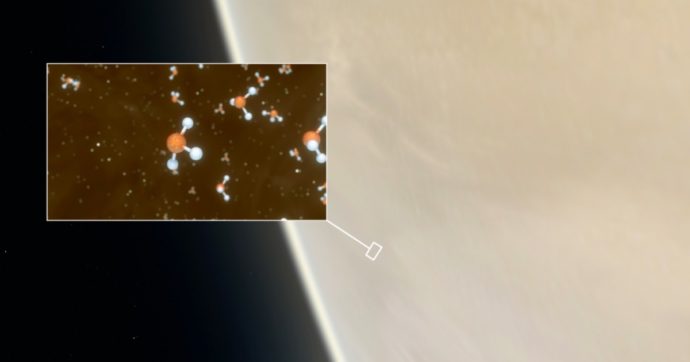 Read also —> Balloons as big as stadiums will take a NASA telescope to the edge of space.

Phosphine in the atmosphere of Venus: is it a trace of life?

An explanation of the discovery comes from John Robert Brucato, astrobiologist at the Inaf observatory in Arcetri. “Here on Earth – said the scientist in an interview – there are no ways for phosphine to be produced in an abiotic way. At the bottom of the sea there are bacteria that, through oxidation-reductive processes, are able to produce it as a waste of metabolism. The discovery leaves this suspense: there could be microorganisms that synthesize phosphine on Venus. Phosphine is a very reactive molecule, phosphorus is found in nature everywhere as phosphate, in oxidized form, the acid environment favors reactions and phosphine should degrade, reacting with oxygen, or photo-degradate, split by the action of sunlight. The fact that it persists for so long is a further indication that there is a phosphine source on Venus. An intriguing thing is the fact that phosphorus is an ingredient of life, at the base of DNA and Rna”. Before singing victory, however, one must be very careful: “Although on Earth only living beings produce phosphine, supporting the presence of life only on this basis is too little. Probably there are also different local conditions, processes that we do not know that produce it“.

Removal of ampicillin by advanced nanomaterial: What do we stand for developing countries?

Environmental pollution is one of the most pressing problems today, it threatens biodiversity, climate change and many other consequences that...

Former US President Obama has intervened in the UFO debate that is inflaming public opinion after the publication of some...