Two astrophysicists have described the first feasible model of warp drive for spacecraft: in the future will we really be able to travel in space like Captain Kirk?

Is the warp drive just science fiction? No, at least in theory! Two astrophysicists – the Swedish Alexey Bobrick and the Italian Gianni Martire – have described the first feasible model of warp drive for a spacecraft. To understand the scope of this “discovery” it is necessary to take a step into the world of science fiction. Warp drive is a type of propulsion invented by the authors of the TV series Star Trek. It allows spaceships to travel at super-speed, that is higher than the speed of light, thanks to a unique mechanism of its kind. In practice it is a system that does not actually push the aircraft forward, but deforms space-time by creating a distortion that shortens the distance to be traveled. Basically, the warp engines contract the space in front of the spacecraft and expand it behind it. To understand the meaning of this theory let’s imagine an elastic fixed between two nails and an ant walking on it. If the elastic is not touched, the ant must walk for all its length to move from one nail to another. If the rubber band is shortened in front of the ant (and consequently enlarged behind it), the animal will be able to go from nail to nail covering a path less than the actual length of the rubber band. In Star Trek, the warp engine is used as a narrative device to justify the very long journeys traveled in a short time by the spacecraft of Captain Kirk and partners. It seems, however, that at the base of this science fiction propulsion mechanism could be something real.

The warp drive of Bobrick and Martire 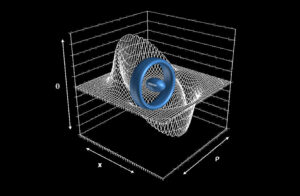 Bobrick and Martire developed their warp drive model from studies conducted in the 1990s by physicist Miguel Alcubierre. The latter had hypothesized that negative energy could contract space-time. The problem with Alcubierre’s theory was that the amount of negative energy needed to expand space was so huge that it was not manageable in any way. Therefore, the two physicists thought of replacing negative energy with gravitational energy. According to their study – published in January in the journal IOPScience – a massive gravitational force could be enough to contract and dilate the space around an aerospace vehicle. To achieve this, “it is enough” to compress a planet-sized mass into a cube or sphere to be inserted into the warp engine as “fuel.” As you can easily guess, this is a project far beyond the current capabilities of science and engineering. The fact that it is a feasible model, however, bodes well for the future: the mechanism can really be built and – Bobrick and Martire assure – it works. At this point, the question arises: in the coming years will we really be able to travel in space like Captain Kirk?

David Berardo posted on Twitter a video of a physics experiment calculating the speed of light using a microwave and...

Former US President Obama has intervened in the UFO debate that is inflaming public opinion after the publication of some...