A group of Japanese researchers has built a robot that can be controlled with the mind thanks to a device that “synchronizes” the brain activity with the software. 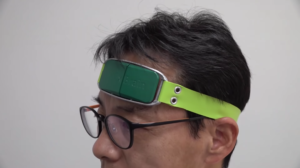 The dream of science fiction lovers has come true. A team of Japanese researchers designed and developed a mind-controlled robot. That’s right: it is an automaton that can be controlled by thought. All this is possible thanks to a wearable device similar to a headband equipped with sensors that “synchronizes” the brain activity of the wearer with the software that governs the robot. The sensors detect three different levels of brain activity. Each level is associated with a sequence of movements. Through an app for smartphones (Zeonic Technica), the band communicates with the robot and “activates” its movements according to the brain activity of the wearer.

Read also → Flying Car? In Japan it is on sale for half a million dollars

The robot that you control with your mind

The project was developed by researchers at NeU, a joint venture between Tohoku University and the electronics giant Hitachi. The researchers’ work “takes its cue” from Psycommu, a mental control mechanism (imaginary) described in the Japanese anime series Gundam. Not surprisingly, the first prototype of mind-control robot is a Gundam! For the moment, the mind-controlled robot is only a prototype. However, the NeU researchers are counting on developing it further and making many practical uses possible soon. For example, the robot could be used for maintenance work in mines, caves, ocean platforms or in all those situations where it is dangerous to intervene “in presence”.

A Canadian company has built an armoured SUV equipped with shatterproof glass and security systems that are perfect 'to fight...

Samsung's SmarTag+ is a wireless sensor that uses the UWB network to create a community for finding lost keys, wallets,...

“Alexa, make me an espresso’: the first voice-controlled coffee machine

The new Lavazza coffee machine is equipped with an intelligent chip that integrates Alexa's functionalities: a voice command is enough...

Rescue arrives by ambulance drone: test in the Netherlands

Delft University in the Netherlands has designed an ambulance drone that can deliver an automatic defibrillator within minutes in the...