In America they are testing Augmented Reality for dogs

The U.S. military is developing Augmented Reality systems for dogs used to support soldiers: they could improve communication with humans.

Augmented Reality is the future. Also for dogs. The United States Army is developing an AR system for its “four-legged soldiers”. These devices are very similar to human glasses. Once worn, the devices would help dogs to orient themselves by improving communication with the guide. The “military dogs” are used in dangerous situations in search of explosives or rescue operations. In these situations, there is often no direct line of sight between the dog and his human guide. AR glasses should solve this very problem by allowing human soldiers to give orders to “fellow dogs” even when they do not have direct eye contact. The project is funded by the Small Business Innovation Research program and is managed by the Army Research Office (ARO) under the Combat Capabilities Development Command’s Army Research Laboratory. 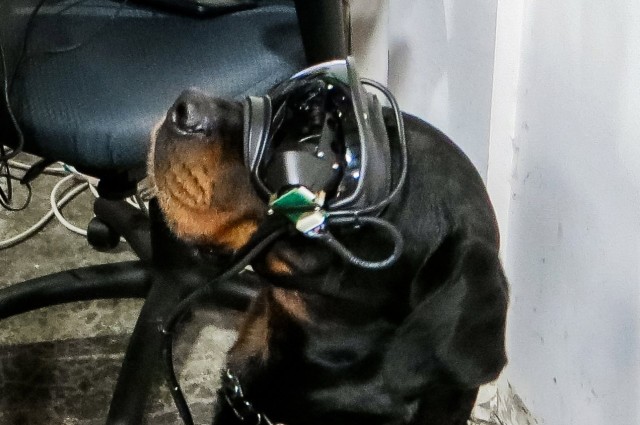 According to US military experts, Augmented Reality systems for dogs could radically change the way these animals are used in field operations. ARO researcher Stephen Lee explained that “Augmented Reality works differently for dogs than for humans. They will need it to provide them with commands and cues, without having to interact with it as a human does”. For the moment, the glasses are just a prototype and are “connected” to the owner by wires. “We are still in the early stages of research for the application of this technology to dogs, but the results are extremely promising,” said project coordinator A. J. Peper. “Much of the research to date has been conducted with my rottweiler, Mater. His ability to move from traditional training to work through AR glasses has been incredible. The researchers are now working to make the system completely wireless. The hope is that working on these systems in Augmented Reality will also improve current knowledge of canine vision and cognition.

Augmented Reality and big brands, here’s who said yes to this technology

Did you know that despite the growth of continued investment in augmented reality for industrial applications, almost two-thirds of the...

Da Zero a 46: The story of Valentino Rossi in Augmented Reality from MoreGlobe AR Platform

The new editorial format dedicated to the Champion of Tavullia “Da Zero A 46” is the name of the officially...

Apple Glass, the wearable device with which Tim Cook aims to revolutionise Augmented Reality and make it accessible, is on...

Microsoft Mesh: the smartworking of the future is in ‘Mixed Reality’

Microsoft has unveiled Mesh, a 'mixed reality' platform that will allow people to participate in events and meetings remotely with...