Biocement: the “living” building material that repairs itself

Biocement is a material created at the University of Newcastle: thanks to a bacterium inside it is able to repair itself.

Biology and engineering combine forces for the construction of the future. A team of researchers from the University of Newcastle has developed an innovative building solution that exploits the biological properties of microorganisms such as bacteria. The result is biocement: a “living” cement that can repair itself in the event of cracks or fractures. The researchers, coordinated by Professor Martyn Dade-Robertson, were inspired by the capabilities of the bacterium Bacilla Filla. The latter reacts to changes in pressure in the environment around it by “producing” calcium carbonate molecules. The researchers thought of exploiting these properties to develop a material capable of detecting changes in pressure and emitting a sticky substance. Applied to the building industry, this means creating a concrete that, in the event of ground movement or very violent impacts, is able to repair itself. 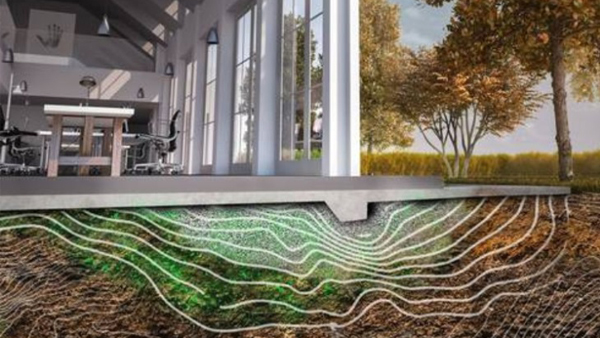 To develop their project, however, researchers at the University of Newcastle started from a common intestinal bacterium, Escherichia Coli. The first step was to identify the genes of the bacterium that respond to changes in pressure in the environment. Subsequently, the researchers modified the DNA of these genes by inserting a fluorescent protein. Finally, the fluorescent protein was replaced with a sticky substance very similar to that emitted by Bacilla Filla. Thanks to these molecular engineering operations, the team obtained biocement, a living building material capable of reacting to stress independently of human intervention. For the time being, biocement has only been used for laboratory tests but, in the future, it could prove to be a very effective weapon for the construction of earthquake-proof buildings. “We are trying to create a material – explained Robertson – that could have wide architectural applications, for example could also be used to create the foundations of buildings without the need to dig trenches and fill them with cement. It’s a very exciting field.

How to easily and safe prepare a barbecue

Introducing the Oxygen Booster, a new ignition facilitator for all charcoal/briquette grills. Winner of the silver medal and the special...

The Plastic Bag Store, nothing is as it seems

The Plastic Bag Store seems to be a classic illumination born out of the observation of everyday objects and the...